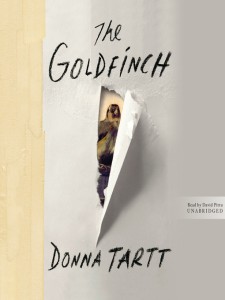 About 3 months ago, a friend persuaded me to start listening to audiobooks. In all  fairness, in the beginning I was a bit reluctant. My experiences with audiobooks were lukewarm at best. I found that I would get distracted half-way through the narration and would end up having to go back and re-listen to an entire segment because I spaced out.

So when about a few weeks ago I started a membership with audible, The Goldfinch was one of the first titles to grab my attention. The Goldfinch had already been in my TBR list for quite sometime, and I had plans to read it, but since I was already reading another book, and I had a five-hour trip to California; I decided to give the audiobook version a try and here are my thoughts.

From audible: The Goldfinch is a haunted odyssey through present-day America and a drama of enthralling force and acuity. It begins with a boy. Theo Decker, a 13-year-old New Yorker, miraculously survives an accident that kills his mother. Abandoned by his father, Theo is taken in by the family of a wealthy friend. Bewildered by his strange new home on Park Avenue, disturbed by schoolmates who don’t know how to talk to him, and tormented above all by his unbearable longing for his mother, he clings to one thing that reminds him of her: a small, mysteriously captivating painting that ultimately draws Theo into the underworld of art.

I have to say that I was extremely excited about this book. There was so much buzz about it and the synopsis sounded very promising. This was my first audiobook and what I really enjoyed about this book was David Pittu’s narration. Pittu does a fantastic job narrating in different accents and voices ranging from teens to young adults. This was a very long book both to read as well as to listen. I’m more accustomed to reading seven hundred or so pages, versus listening to a thirty-two plus hour audiobook.

I would recommend this audiobook despite the fact that the book fell a bit short of my expectations. Especially after having read all the raving reviews, and indeed Donna’s prose is beautiful, but too wordy. You can easily fast-forward the last two hours of the book. The dialogue with Theo by himself in a room in Amsterdam felt interminable. The characters were rich and compelling, but Boris, the Russian friend, was a richer character than Theo–in my opinion.

I believe that this book could have removed a good two hundred pages and it would still have been an extremely compelling novel. As for the audiobook, thanks to the excellent narration by David Pittu my trip to California was an audible delight.